Five Things You Didn’t Know About Energy in China (VIDEO)

China is becoming the global leader on climate change.

Last week, EPA chief Scott Pruitt called the Paris Agreement a “bad deal.” He claimed China has made no significant efforts to curb carbon pollution, while the United States has sacrificed jobs to meet the terms of the pact.

The same day that Trump called for a rollback of federal limits on carbon pollution, Chinese Foreign Ministry spokesman Lu Kang reaffirmed China’s commitment to the Paris Agreement, saying “as a responsible, large, developing country, China’s resolve, aims and policy moves in dealing with climate change will not change.”

Xi will be in Florida this week to meet with Trump at his Mar-a-Lago estate. It’s unlikely the two will talk about climate change, but China has made clear that it’s not backing down from its plans to tackle the carbon crisis.

Here are five facts about China’s progress on climate and energy.

Though the country is often associated with coal, China is the world’s largest solar producer, nearly doubling its solar capacity last year alone.

As the world’s largest energy consumer, China aims to have 110 GW of solar and 210 GW of wind installed by 2020. That’s more than double the solar and wind capacity currently installed in the United States. China could meet its solar target as early as next year, according to Greenpeace. 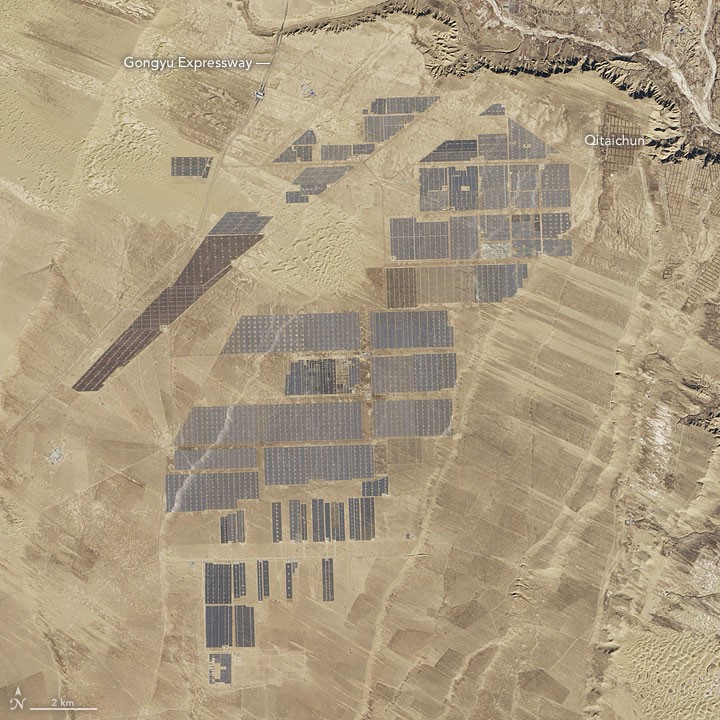 2. China’s coal consumption has dropped three years in a row.

Despite growing demand for energy, China has been shifting steadily away from coal. In January, the Chinese government canceled the construction of more than 100 coal-fired power plants, in an effort to reduce air pollution and slow climate change.

In a 2016 commentary in Nature Geoscience, researchers said that China’s coal use has already peaked. British climate economist Lord Nicholas Stern, a co-author of the commentary, told The Guardian this represented “a very important event in the history of the climate and economy of the world.”

Thanks in part to falling coal consumption, China’s carbon emissions have stayed flat — or declined — for the past three years. China has pledged to peak emissions by 2030.

3. China plans to invest at least $360 billion in renewable power generation by 2020.

China leads the world in renewable energy investment and recently announced it would put some $360 billion towards renewables by 2020. According to China’s National Energy Administration, half of all new electricity generation by 2020 will come from wind, hydro, solar and nuclear power.

The New York Times reported that the “investment commitment made by the Chinese, combined with Mr. Trump’s moves, means jobs that would have been created in the United States may instead go to Chinese workers.”

Renewable energy already employs 3.5 million people in China, compared with less than a million in the United States. China expects new investments will create 13 million more jobs in the sector by 2020, according to China’s National Energy Administration.

5. China aims to have 5 million electric vehicles on the road by 2020.

To put that figure in perspective, there were only 1 million in the world in 2015. China is becoming a major market for electric vehicles. Last year, nearly 50 percent of all new electric cars were sold in China. The country has ambitious targets for the rollout of zero-carbon cars. One point of interest: over the next five years, Beijing will replace all 70,000 of the city’s gas and diesel-fueled taxis with electric vehicles.

Bridgette Burkholder writes for Nexus Media, a syndicated newswire covering climate, energy, politics, art and culture. You can follow her at @bridgette_ck.

Bridgette Burkholder works on international climate politics and is currently based in Berlin, Germany. She writes on climate diplomacy and policy and tries not to use too many acronyms. You can usually find her with a coffee or a book in hand.

How Cities Can Help the U.S. Reduce Food-Related Emissions